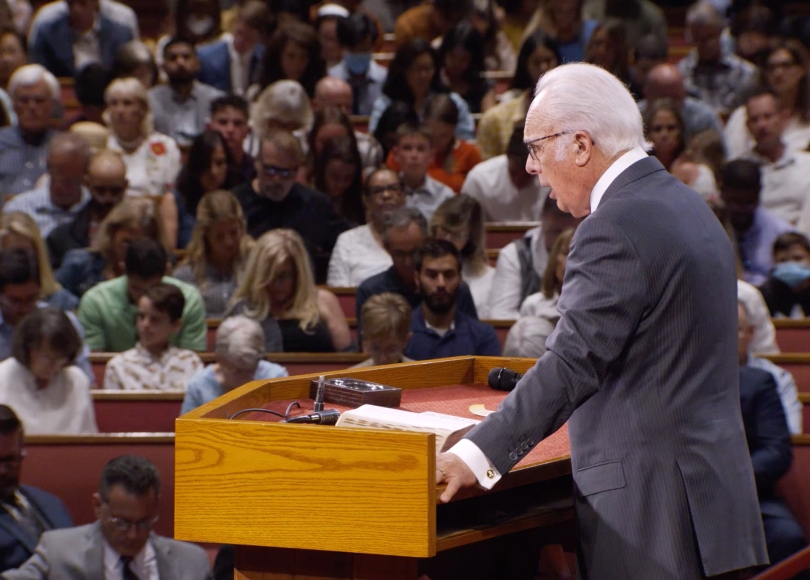 Even during the time of my greatest evangelical fervency, I was not a fan of evangelicals’ much-revered John MacArthur, the pastor of the gigantic Grace Community Church in California. I was and still am, however, in the minority in that view. MacArthur is one of the most influential leaders in the evangelical movement. So, when he openly defies legally imposed state health sanctions on corporate gatherings, he sets a trend many other evangelical churches are likely to follow. And when he parrots our patently partisan president in falsely proclaiming children to be essentially immune to the COVID-19 virus, evangelicals throughout the nation take his words as gospel. When he cites the need to gather those children by the hundreds for Bible lessons as justification for mass gatherings, he sets an evangelical standard sure to be emulated.

MacArthur better be sure he’s right; his own very rigid theology condemns to eternal hell-fires anyone who fails to precisely obey God’s laws. If his defiance of state regulations violates the Romans 13 passage about obeying governmental authorities he and most other evangelicals apply so commonly yet selectively, then this leader of a most graceless Grace Community Church will forever be crying out for mercy as he burns in eternal agony.

John MacArthur is probably the highest profile purveyor of an evangelical doctrine often referred to as “Lordship Salvation.” This creed holds that in order to be “saved” from an eternity of burning in the fires of hell—never being able to die—one must believe in the atonement provided through the death of Jesus the Messiah (Christ) AND live a godly life. Throughout one’s life, one must work diligently at avoiding sin in order to escape eternal damnation.

If you couple that doctrine with the plentiful prospects for falling to such temptations, one should wonder why anyone—much less the thousands of faithful congregants—would voluntarily pass through the doors of the inappropriately-named Grace Community Church (GCC). It would seem that the only way for GCC congregants to avoid despair and embrace hope would be to take a colossal existential leap—a leap necessitated because of the obvious lack of the attribute the church is named for.

Meanwhile, this very strict and authoritarian church leader defies state health authorities’ call for strict guidelines as a means of mitigating the spread of a virus that has killed more than 170,000 Americans and nearly three-quarters of a million humans around the planet. His justification for this civil disobedience is that “We must obey God rather than men,” which was the first-century apostles’ answer when government authorities told them to quit preaching.

MacArthur’s answer might sound biblically appropriate—initially. But look a little deeper and see this distinction: When the high priest and the ruling council forbade the apostles’ preaching, it was a comprehensive demand. No preaching anywhere in the city, under any circumstances. California’s COVID-based health regulations pertaining to this situation are not absolute, nor are they aimed specifically at preaching the gospel.

The regulations state as follows:

The regulations do not ban religious gatherings in particular; rather, they ban large, indoor gatherings of any kind. Religious groups–wearing masks and following social-distancing guidelines–may gather in smaller assemblies and preach as they choose. Churches were not specifically targeted. No one within California’s government has called for a ban on preaching the Christian gospel. So MacArthur’s citation of the first-century apostles’ declaration about obeying God over men is, like the name of his church, inappropriate and misleading. Sadly, evangelicals throughout the nation will view this flawed analysis from one of their revered leaders as the final word.

The very Bible evangelicals uphold as their ultimate guide for beliefs and behaviors plainly declares that governments serve a purpose. The passage evangelicals regularly refer to as justification for supporting their ungodly choice as our current president, Romans 13:1, says, “Let everyone be subject to the governing authorities, for there is no authority except that which God has established. The authorities that exist have been established by God.” But that subjection has become very selective for evangelicals; it applies when attempting to cajole others into supporting their ungodly president, but it has no bearing on decisions that counter their preferences.

A favorite-but-often-misunderstood (and rarely applied) Bible passage among evangelicals is Philippians 2:3-8, which says,

Do nothing out of selfish ambition or vain conceit. Rather, in humility value others above yourselves, not looking to your own interests but each of you to the interests of the others. In your relationships with one another, have the same mindset as Christ Jesus: Who, being in very nature God, did not consider equality with God something to be used to his own advantage; rather, he made himself nothing by taking the very nature of a servant, being made in human likeness. And being found in appearance as a man, he humbled himself by becoming obedient to death— even death on a cross!

A Gospel of Humility

Pastor John MacArthur—and many or most other evangelical pastors and congregants—seem to have forgotten the key gospel message of humility. Most modern evangelicals—like their new messiah in the White House—are more concerned with “winning” than with following the true Messiah who valued others above Himself, who looked to the interest of others, who took on the nature of a servant. They’ve put their desires for grand gatherings ahead of the public health, ahead of the interest of others.

MacArthur and likeminded evangelicals might win their lawsuit against the State of California, County of Los Angeles, and retain their right to gather indoors by the thousands with no masks and no social distancing, but as they infect one another and then spread those infections to thousands of others, they will have lost their souls, their humanity, their opportunity to be like the one they pretend to follow.