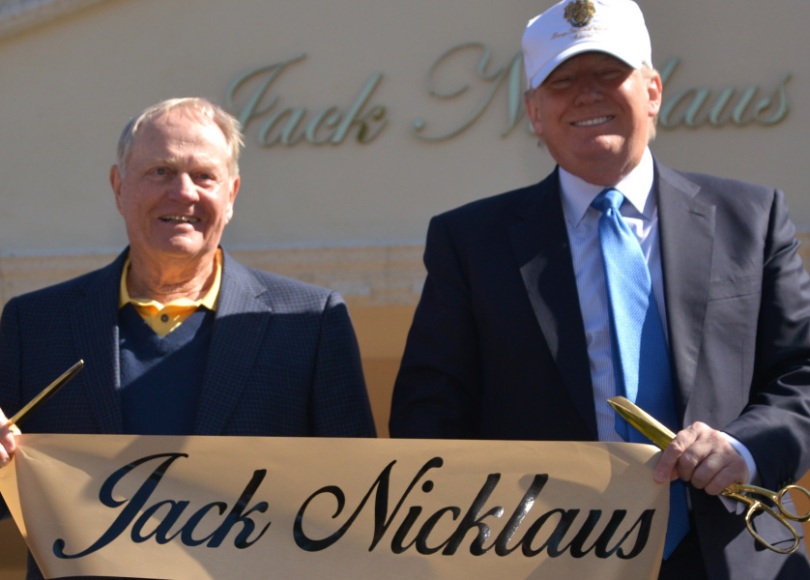 The Golden Bear. If you’re a sports fan, you probably know to whom this nickname refers. But many of you are not, so as a public service, the iconic handle belongs to Jack Nicklaus, widely considered the greatest golfer who has ever lived.

Mr. Nicklaus is from my home state of Ohio, went to The Ohio State University, won 73 tournaments in his career, including 18 majors. His career is legendary and respected throughout the world as the greatest golfer ever and one of the most generous, who raised and donated millions of dollars, especially in children’s health care.

Yet, despite all of those accolades, Mr. Nicklaus did something a couple of days ago that, in my view, sullied his once sterling reputation: He endorsed and voted for Donald Trump. As someone who’s admired him for many years, I can no longer look at him in the same way.

What the hell was he thinking?

Look, Mr. Nicklaus has every right to vote for whomever he pleases and to speak out whenever he wants. But when you read his statement that he released on Twitter, you realize the man is as clueless as the rest of Trump’s cult.

For example, he acknowledges knowing several presidents on both sides of the aisle. He writes, “All were good people. All loved their country. And all believed in the American Dream.” Seriously? Does he put the current president in the same league with the other presidents he’s known?

And then he goes on to write the following: “I have seen a resolve and a determination to do the right thing for our country. He has delivered on his promises. He’s worked for the average person. In my opinion, he has been more diverse than any President I have seen and has tried to help people from all walks of life-equally.”

I wonder who Mr. Nicklaus is referring to when he speaks of Trump working for the ‘average person.’ Does he mean himself, a multi-millionaire many times over who received a massive tax cut? Or, does he mean cutting things like food stamps for people and trying to take health care away from millions?

And perhaps the most galling statement of all: “This is not a personality contest; it’s about patriotism, policies and the people they impact. His love for America and its citizens, and putting his country first, has come through loud and clear.”

Do you mean putting his country first by lining his pockets with government money spent at his properties? By trying to get a foreign country to intervene in his reelection by asking them to dig up dirt on his potential rival for president? By calling people in the military suckers and losers? I’m beginning to think that Mr. Nicklaus must be an avid watcher of a particular state TV network. He doesn’t know, and he doesn’t know that he doesn’t know.

I guess I shouldn’t be surprised, though. After all, this is just one old rich white guy endorsing another old rich (?) white guy. Oh, and both are in the golf course and real estate business as well. Like minds think alike, I suppose.

There have been a few other sports personality endorsements for the current president lately; NFL Hall of Fame quarterback Brett Favre and former journeyman QB Jay Cutler, to name two. It’s funny, though. When Lebron James and other famous African-American athletes speak out on social issues or endorse Democrats, they’re told to just “shut up and dribble.” Or, when athletes kneel for the National Anthem, the current president has said, “I’d fire the son-of-a-bitches!”

I think we won’t see the “outrage” from Fox News over these particular sports celebrity endorsements. And the current president will, of course, brag about how these “great Americans” love him—more hypocrisy from the most hypocritical president in history.

But maybe I’m missing the real story with Mr. Nicklaus. Perhaps he shares more traits with the current president than I had previously known. According to a recent column by Christine Brennan of USA Today, when asked in July 1994 by a Vancouver Province reporter about the lack of Black people in golf, Nicklaus responded, ” Blacks have different muscles that react in different ways.” According to Brennan, Nicklaus never denied the comment but said it was taken out of context. Oh, I’m sure it was.

When I was growing up in Akron, Ohio, my father and I would watch golf on TV together. I was a big Arnold Palmer fan, and he loved Nicklaus. He used to tease me about how great Nicklaus was and how much better he was than Palmer. Those kinds of things you tend never to forget – the bonding between a son and his dad.

And over the years, I grew to admire Nicklaus for how great a golfer and humanitarian he was. So, why, at the age of 80, he decided to weigh in to endorse the sexist, racist, misogynist president is beyond my wildest imagination. I wouldn’t think it’s the way someone would want to be remembered in the last years of his life. But he has a right to his opinion – as wrongheaded and ridiculous as it is.

But Brennan also pointed out something else in her column, and it probably explains a lot. Nicklaus was a white male golfer, born in 1940, who spent his entire life in a sport that kept women and minorities from participating. His admiration for the current president kind of makes sense when you think about it. His years of privilege and insulation from most of American society more than likely plays a part in his worldview.

In the Donald Trump era, we’ve seen over and over who his supporters are. They ignore his lies, his racism, his callous disregard for human life, his decimation of our democratic institutions. None of that stuff matters to them because he speaks for them. He says what they all think. They love the insults and bullying because, for some reason, it seems to resonate with them.

To have a sports legend and icon like Jack Nicklaus fall into this category is beyond disappointing. I realize it’s not a big deal to many of you out there. But to me, in such dangerous and uncertain times, a man with this kind of influence and status, especially in the sporting world, should know better.

Now he decides it’s time to weigh in? Now he chooses to speak out for this particular president?

As the title to political strategist Rick Wilson’s book says: Everything Trump touches dies – including, now, the once impeccable reputation of Jack Nicklaus. May it rest in peace.