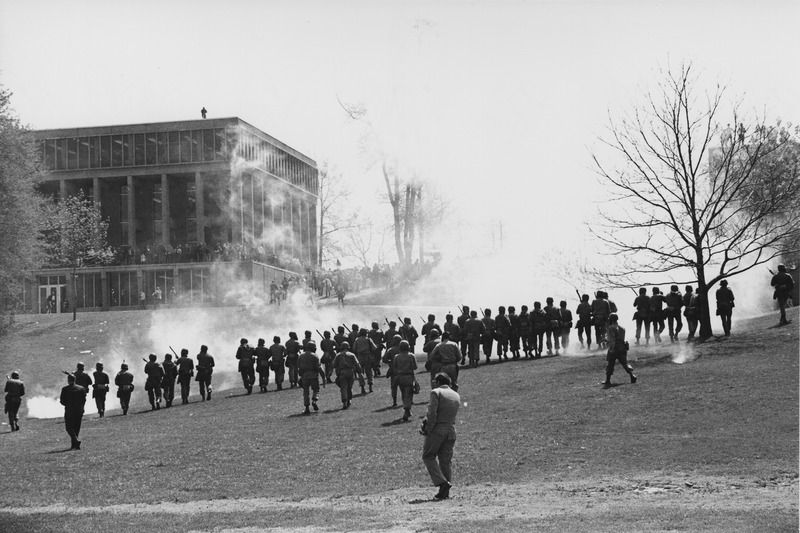 I’ll never forget coming home from elementary school on the afternoon of May 4, 1970. Only eight years old at the time, I hadn’t heard about the tragedy that occurred only a couple of hours earlier, 20 minutes up the road from my hometown of Akron, Ohio, at Kent State University. Four students were slaughtered and nine more were wounded when the Ohio National Guard opened fire at 12:24 pm while attempting to disburse several thousand protestors that had gathered on the commons to protest the Vietnam War.

I’m not quite sure who it was that told me, but I assume it was one of my older siblings. I remember the sadness and I certainly remember the anger. My oldest brother was hurt the most. He’d been a vocal opponent of the war and if not for a later nervous breakdown, he would have been on his way to fight in a war he so desperately despised.

Currently I’m writing an article for The Culture Crush about the Kent State shootings. I was supposed to be in Ohio at this very moment to take part in the 50th Anniversary Commemoration ceremonies. In fact, much of my article was going to be related to the entire weekend.

I had my plane tickets. Discussions and interactive exhibits were planned, as were speeches by folks such as actress/activist Jane Fonda and Harvard Professor Lawrence Tribe. A concert with Joe Walsh and David Crosby co-headlining was planned for Saturday May 2. I had tickets for that, too.

And none of it happened. The pandemic took care of that and to say I’m a little disappointed would be an understatement. But there’s nothing I can do to change that. It’s a sad thing it didn’t go on as planned because if any event deserved an entire weekend of thoughtful and reflective recognition, it was this one.

But in the 21st century, thankfully our digital age allows us to make do when you can’t be somewhere live and in person. So the university, in conjunction with the May 4th task force put together a nice nearly hour long virtual commemoration. It’s very moving and well done. At the end is a powerful version of the song “Ohio” performed by David Crosby.  Please share with others.

In addition, my good friend and blog-partner Greg shared an article written by Gerry Casale of the rock band Devo for The Rolling Stone. In it, Casale details his eyewitness account of that day 50 years ago. He was a student at Kent State at the time and an active anti-war protestor. His account is as chilling as it is predictive of the direction America would take in the ensuing years.

To think something like Kent State could never happen again would be a huge mistake. I  take a pause every May 4th because it has and always will be a day I’ll never forget. This being the 50th anniversary of that tragic day makes it a milestone. But to me, we need to  keep in mind that our government is capable of doing some really bad things. We’re seeing that now on a daily basis.

As Winston Churchill said in a speech to the House of Commons in 1948, “Those who fail to learn from history are condemned to repeat it.” Let us never make that mistake again.