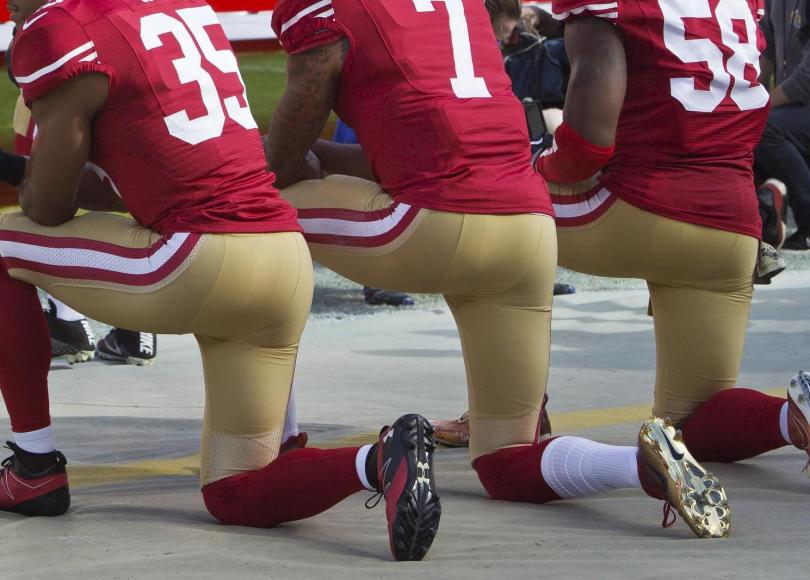 Nearly everyone in America has strongly-felt opinions about football players ‘taking a knee’ during the playing of our National Anthem, and I’m no exception. At the beginning, when Colin Kaepernick was the very first player to kneel, I was wary.  So many people try to attract attention for attention’s sake that I initially assumed Kaepernick was doing the same.  But as more players joined him and the protests grew, I paid attention to the message these players were trying to convey and soon threw my support behind them.

I get that not everyone feels football games are the appropriate platform from which to draw attention to social injustice in America. I understand how many people feel that football games are a form of entertainment and should be an escape from the daily turmoil we face in our nation.  I also see how many people view the protests as disrespectful to our flag and to the men and women who fought and died for our freedoms. But to all those who feel that way, I would point out that history has repeatedly shown that we must always be ready to take a look inside ourselves and reconsider how we feel.  This has never been more necessary than now.

America can sometimes run off course, and in the present administration, it’s flying off the rails.  As American citizens, it’s our duty to re-lay the track and set America straight.  Often this can only be accomplished through careful thought and reflection, followed by changes in our thinking… even about football players ‘taking a knee’ as our National Anthem is being played… which might seem much less important than other issues we face.

NFL Commissioner Roger Goodell recently announced that any players and personnel who are on the field during the playing of The Star Spangled Banner must stand and ‘show respect’ for the flag.  Teams will face fines by the NFL if any of their players defy the new rule.  The new rule gives the players the option of waiting in the locker room until the conclusion of the National Anthem.

I’m very disappointed.  I’d hoped for a huge wave of support for these players, but what the players got instead was a watered-down version of the “America: Love It Or Leave It” mentality, which added some apparent substance to President Trump’s comment that “Maybe you [the protesting players] shouldn’t be in the country.”  Too bad for Donald Trump that it doesn’t work that way in America.

Kaepernick said in an interview that “I am not going to stand up to show pride in a flag for a country that oppresses black people and people of color.  To me, this is bigger than football and it would be selfish on my part to look the other way.  There are bodies in the street and people getting paid leave and getting away with murder.”

This isn’t a case of somebody grandstanding for attention.  To stand before an audience of millions and willingly place himself in bitter controversy takes great courage and deep conviction. To say and do nothing is to be meekly complicit of something we see as wrong in America.  We’ve seen the videos and we’ve known the score for years, so let’s not kid ourselves.  We know the reality of life in America for black people and there’s no denying it.

It’s been said that as American Citizens, we must be the custodians of our Constitution and our Bill Of Rights.  They are nothing but words if we don’t revere and defend those wonderful ideals written down by our founding fathers.  Kaepernick ultimately reached the point where standing during the National Anthem felt like hypocrisy, so after much thought and reflection, he expressed himself by dropping to his knee.  He knew he would attract bitter attention, but he wanted to point out that ‘Liberty And Justice For All’ was simply a myth for people of color in the United States of America.  Colin Kaepernick is proving himself to be an American citizen with guts and a fighter for equality and justice.  He is a caretaker of our country and a custodian of our constitution… the way all of us must be.

Think about your patriotism and what it truly means, or perhaps what it has come to mean in our bitterly-divided nation.  Yes, we should honor our flag and our vets, as we usually do, in our minds and in our hearts. But now think a little differently.  Think a little farther and a little deeper.  Consider that ‘honor’ takes many forms.

Understand that these players, through their protests, are not insulting our flag… they are honoring it.  They love our country so much they are doing what every American should be ready to do…. they are calling America to the carpet because our most basic human and constitutional rights are being violated.

Sometimes it takes kneeling during the National Anthem to alarm our citizens first, and make them empathetic next.

These issues are much bigger than football.   Colin Kaepernick, who remains unsigned to any team, would know more than anyone. He may have sacrificed his entire NFL career by simply doing what he felt he had to do, and I believe he’d do it all over again in another time and circumstance.  I personally hope the protests continue, and I hope the message becomes so prominent it becomes impossible to ignore.  I hope the individual clubs will follow the example of the New York Jets owner Christopher Johnson, who has said that he will pay the fines himself if his players decide to protest.

In our country, needed change never comes about from sitting on one’s hands and closing one’s mouth.  It comes about through introspection, vocal dissent, a presence in the streets and a wave of responsible voting at the polls.  It comes when we Americans stand up for what’s right in our country.  Or if ordered to stand, when we take a knee instead.