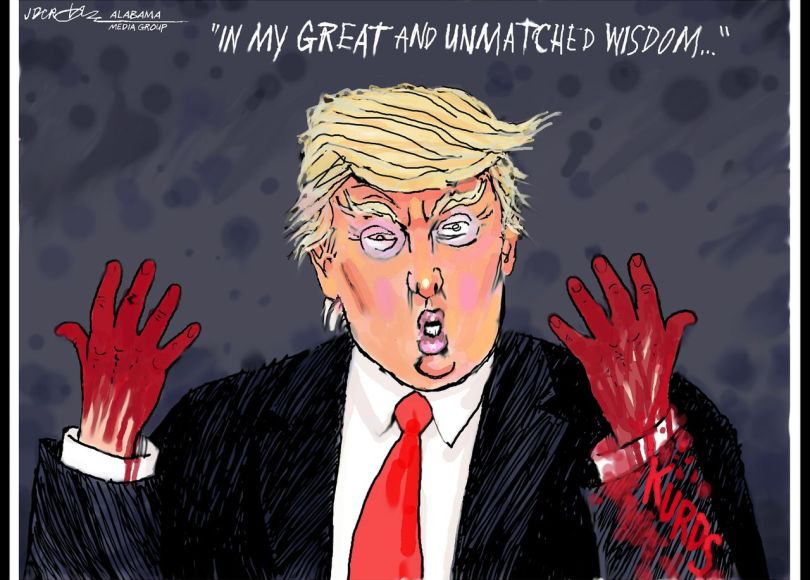 I assume that most of you have not heard of Crede Bailey, so I’m going to share a few things I’ve learned about him the past few days.

Bailey, a 54-year-old married father of one and career civil servant, is the current White House director of security. His job includes handling White House credentials and working with the Secret Service. If you remember, back in September, we began to hear about numerous Covid-19 infections spreading within the White House.

It’s believed that Bailey contracted Covid around this time and was hospitalized shortly before the official September 26 super-spreader event nomination of Justice Amy Coney Barrett to the Supreme Court. I remember hearing about Bailey around this time and how he was very sick but have not heard anything since then. Until Monday, that is.

It turns out that Bailey has been gravely ill for the last three months, spending much of this time in an ICU. He’s recovered from Covid, but his life going forward will never be the same. According to a family friend, Dawn McCrobie, Bailey’s recovery from Covid has come at a high cost: “his big toe on his left foot as well as his right foot and lower leg had to be amputated.”

The only reason we know about this is that McCrobie has set up a GoFundMe page to help with Bailey’s rehabilitation. According to her post from that page, he’s currently at a rehab facility undergoing physical therapy. “Consider yourself disabled for a moment and look around your house to imagine all the changes necessary to accommodate a disability of this magnitude,” McCrobie wrote.

The cost of reconfiguring his home and other rehab related issues is substantial, and thankfully they’ve already raised more than $36,000 of the $50,000 goal as of late Monday afternoon. McCrobie also made it known that neither Bailey nor his family was part of the GoFundMe effort, as they are much too proud to request such a thing.

It’s a depressing and heartbreaking story for sure, and there are many more like it all around the world, unfortunately. But in this case, it’s not just sad, but also highlights how wholly and utterly irresponsible this White House has been in dealing with the pandemic.

I have no idea how Mr. Bailey contracted the virus but is it a stretch to think he got it at the White House? His workplace may have been one of the most infectious anywhere in the world – led by the super-spreader-in-chief himself. He never took the virus seriously in the first place, and his reckless campaigning and other White House events were nothing but massive breeding grounds for this virus to spread like a raging wildfire.

It’s no surprise we didn’t hear much about Crede Bailey’s harrowing experience until now. The White House refuses to comment on the situation, as we should come to expect from this crowd. It should not surprise us that Bailey was known to be a loyal supporter of the current president.

How many more loyal Trump supporters have suffered the same or even worse fate as Creed Bailey during this pandemic? We may never know, of course, but I bet it’s a substantial amount. His supporters pay attention to what he says. They saw how he rarely wore a mask and ridiculed those who did. All the lies, disinformation, and inaction led to needless deaths and suffering for thousands of people.

If there’s a more despicable human being on the planet, I’d like to know who that may be. Because this president, and his team of despicable sycophants, must be held to account for their actions during this disastrous pandemic.

Yes, he contracted the virus himself but received experimental treatments and drugs that most of us out here in the rest of America could not get. His buddy Rudy Giuliani got Covid as well – saying out loud what we already knew – that when you’re a “celebrity,” you get access to the good stuff.

What a mess. They should all be charged, or at the very least, sued for negligence in how they conducted themselves. Crede Bailey is but one of the thousands who’ve suffered needlessly, and we certainly hope that he and others who’ve survived can have a decent life moving forward.

It didn’t have to be this bad, but when you’re led by a group of people lacking any empathy whatsoever and who don’t give a crap about anything other than the power they possess, this is what you get.

You’re damn right the current president has blood on his hands. Unfortunately the only punishment he’ll likely receive is the one nearly 82 million of us dished out to him on November 3, 2020. In 36 days, his pathetic ass becomes a private citizen again. I can only hope the long arm of the law catches up to him –one way or the other.