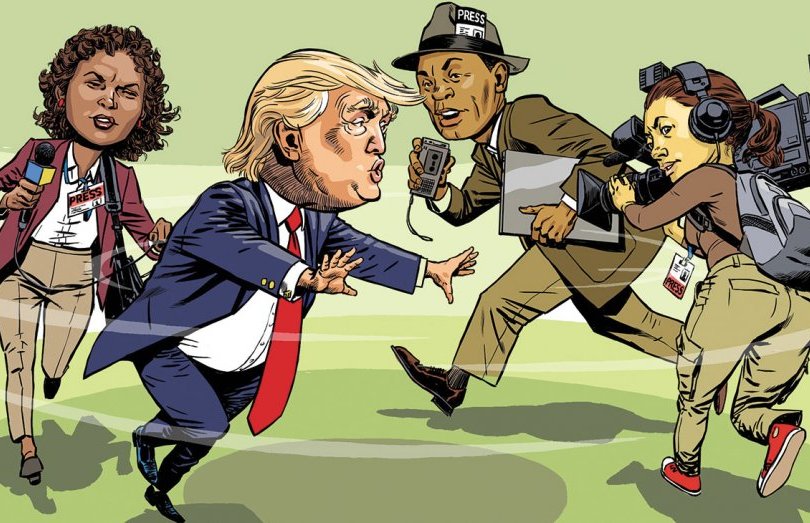 For over three years now, our national media continues to try and normalize this president. Nobody points this out better than media critic Eric Boehlert. You’ve maybe seen Eric on MSNBC, as he’s regularly on AM Joy on most weekends. For years he wrote for Media Matters, a progressive non-profit organization that specializes in monitoring and analyzing conservative media lies and misinformation. In addition, he has a regular segment on progressive talk-show host Stephanie Miller every Monday on SiriusXM Channel 127. Now, he has his new website: Press Run. I hope you enjoy Eric’s take. As usual, he’s spot on. There are links below if you’d like to subscribe to his site. It’s free.

After three years we start to lose the words and the right language to describe Trump’s often demented behavior. Unhinged, incoherent, and relentlessly misinformed, Trump has done untold damage to the presidency. And now, with America facing a looming pandemic, Trump’s dangerous actions threaten to take a deadly toll.

Yet the Beltway press, determined to normalize Trump at every turn, refuses to break with its three-year timidity and to be honest with news consumers about what’s happening. The latest, and most stark, example of that failure came when Trump visited the Centers for Disease Control and Prevention in Atlanta on Friday and briefed a troubled nation on the state of the novel coronavirus, the disease that has so far infected more than 100,000 people around the world and killed more than 3,500—including at least 19 in the United States.

These were among the low-lights as Trump addressed reporters while wearing a campaign hat at the science institute:

-He lied and said anybody who wanted to could get tested for the virus.

-He insisted he didn’t want infected passengers let off a cruise ship in San Francisco because that would increase the tally of victims in the United States.

-He bragged about his uncle who was an MIT professor.

-He referenced Fox News reporting instead of government reports regarding the virus.

-He asked a Fox News reporter about the TV ratings for Trump’s recent town hall on that network.

-He bragged that he was a gifted science student: ” Maybe I have a natural ability.”

It was the equivalent of a national emergency — a declaration of incompetence and delusion on a grand scale. And yet much of the press coverage looked away, refusing to simply detail Trump’s transparently shocking behavior.

The New York Times covered the stunning event as a straight ahead news story, feverishly whitewashing all traces of the Trump madness and presenting the CDC visit as somehow being normal. “‘It Will End’: Trump Urges Nation to Avoid Panicking” read the absurd Times headline.

President Trump sought to play down the coronavirus outbreak on Friday and offered a vote of confidence to besieged federal health officials as infections spread further, markets tumbled again and the authorities scrambled to accelerate the availability of testing kits across the country.

Imagine witnessing what Trump did at the CDC and coming up with that news lede.

Thankfully, some journalists pulled back the curtain. “As a reporter, in general I’m not supposed to say something like this, but: The president’s statements to the press were terrifying,” wrote Adam Rogers at Wired, following Trump’s  CDC fiasco.  “That press availability was a repudiation of good science and good crisis management from inside one of the world’s most respected scientific institutions.”

But all last week as Trump abandoned attempts to lead a country in a time of crisis, the press too often bent over backwards to try to normalize his bizarre and dangerous behavior, portraying him, at worst, as slightly eccentric.

This was the innocent question the Associated Press posed, as Trump did his best to mislead the public: “Whom to believe on the coronavirus threat — the president saying one thing or the public health officials standing beside him and saying something a little different?”

The AP stressed there was a “disconnect” between Trump’s “breezy” style and what he was saying, and the actual truth about the virus, Why not just come out and report that the President of the United States was relentlessly lying about a public health crisis?

In a cringe-worthy report last week, National Public Radio stressed that Trump’s “breezy” approach (there’s that word again), where he relies on his “gut” for information, was “colliding with a public health emergency in the form of coronavirus.” Specifically, Trump, as part of his calculated misinformation campaign, had appeared on Fox News and completely contradicted government experts’ estimates for the virus’ mortality rate. There’s nothing “breezy” about that.

Over the weekend, Politico went with a headline that blamed Trump’s “haphazard” management style for the coronavirus confusion. (The headline has since been changed.) “Haphazard” suggested that Trump had been needlessly sloppy and disorganized in his handling of the virus crisis, which honestly would be welcomed if that were the case. Instead, Trump has been purposefully lying to the American people about the virus. Yet how many “Trump Lies About Pandemic” headlines have you seen in recent days? Zero, right?

Let’s be clear: There has been some outstanding and brave reporting on coronavirus in recent weeks, as news organizations throw extraordinary resources at the historic story and try to make sense of the fast-moving crisis. But in terms of the Trump coronavirus coverage, the press has utterly failed in telling the truth. And that stems from the press’ three-year commitment to normalize Trump. By refusing to call him a liar, refusing to call him a radical, refusing to question his inability to communicate in a coherent, cogent way for days on end, the press has shied away from truth-telling in favor of normalcy.

And now, as the country teeters on the precipice of a truly dangerous chapter in our history, the consequences of that normalization campaign are exploding into full view.