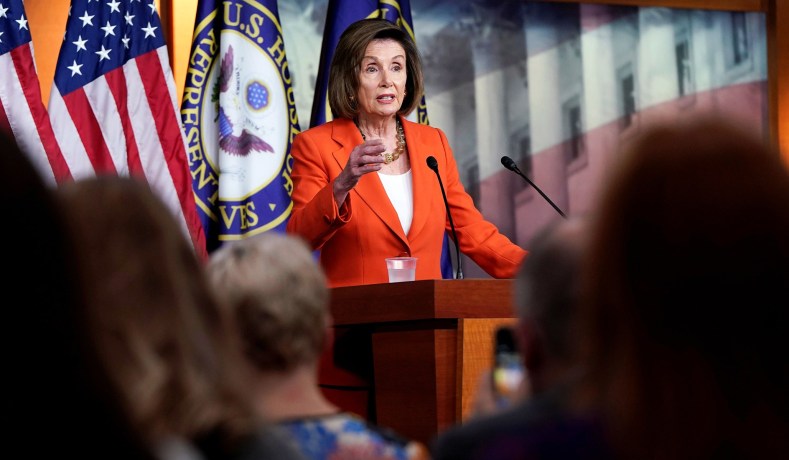 Nancy Pelosi spoke today, and Donald Trump’s day of reckoning fast approaches. For only the fourth time in the history of this republic, articles of impeachment were submitted against a sitting president of the United States of America. Two articles, one for abuse of power, the other for obstruction of Congress, were released by the House Judiciary Committee. You can read them here.

In all, the document consists of only eight pages, a nod towards an increasing attention-averse population. The entire inquiry proceeded in this manner. Just short of 80 days, we’ve seen the committee do its work in swift and sweeping fashion. The Republican Party is left with no other option than to whine and complain to whoever is within shouting distance. President Trump is about to be impeached. As Trump’s Chief of Staff Mick Mulvaney said in his press conference weeks back, “Get over it!”

There’s an argument out there that says House Democrats should be patient. Let’s wait for the courts to decide on some of the more thorny issues regarding who can testify—then proceed when all measures are exhausted. But, as House Intelligence Committee Chairman Adam Schiff alluded to today in the press conference, “Why, so he can cheat again?”

As the articles so clearly state, the President is a clear and present danger to our democracy. Acting now is the only option, or he’ll continue to seek foreign help and cheat his way to victory in 2020. Time is of the essence.

In months past, there’s been disappointment as it pertains to how Nancy Pelosi and Schiff were handling Trump and his corruption—myself included. I wondered what the hell they were doing. Why such dithering? When are they going to hold him to account?

Well, she answered that question loud and clear today. And far be it for me to question the Speaker. She’s so adept at this; it’s mind-boggling. Remember, it was she who proclaimed that Trump would eventually “self-impeach.” Damned if he didn’t prove her right. And, he continues to do so as we speak, with his lawyer and henchman, Rudy Giuliani, currently in Ukraine continuing to try and dig up dirt on former Vice-President Joe Biden.

They’re so brazen they do it in front of our faces for everyone to see.

But there’s also another argument that says we ought to include other Trump misdeeds in the articles as well. I’m sensitive to this line of thinking too. But again, the American people will not pay attention if we go down the road of The Mueller Report, emolument clause violations, or other allegations. At least that seems to be the view of Pelosi: Make it short, easy to understand, and as clear-cut as possible.

And that’s what the Democrats did today. We also must remember that Pelosi understands her caucus better than anyone. There are probably 25 to 30 members elected in 2018 that won in districts where Donald Trump beat Hillary Clinton, some by large margins. If Pelosi is going to go as far as she has today, you know she’s got the votes. Nobody is better than her at this.

To show how adept the Speaker is at being aware of public sentiment, within minutes of the impeachment press conference, she had another press conference. This time, it wasn’t about impeachment but was an announcement that they had reached an agreement with the Trump administration on ratifying the so-called USMCA, the new and improved NAFTA.

What have we heard about from the Republican Party throughout the entire impeachment inquiry process? The do-nothing Democrats. They want to get rid of the President, while the needs of the American people are ignored.

Pelosi took that issue right off the table today. While most of us know that well over 250 bills are stuck on Senate Majority Leader Mitch McConnell’s desk, this action shows that the Democrats are more than willing to work with Trump to move the country forward.

Yes, it gives Trump a victory, as well. She’s willing to let him take a victory lap of sorts. I’m not going to lie; it’s tough to swallow. But again, I’m going to defer to Pelosi on this. He’ll still say what he always says about the do-nothing Democrats. But this time, some of those more vulnerable members of Congress can show their constituents that they can not only hold the President to account, but also can get things done for the people. It’s a win-win.

Soon, we’ll have a vote in the Judiciary Committee, perhaps as early as this Thursday. Then, we’ll probably move to the overall House for debate and a full vote on impeachment sometime before the Christmas holiday.

Then, it’s on to the Senate, where McConnell and Minority Leader Chuck Schumer will have to work out the rules for the impeachment trial. At this point, it’s anyone’s guess as to how this will play out. We know Trump and his cronies will do their best to make this something resembling Barnum and Bailey’s Circus. But we don’t know yet. Stay tuned.

Bottom line: we saw history today. We shouldn’t be proud, however. We should never want our presidents to suffer this fate. But the Founders knew there was a chance we’d get a guy like Trump. Alexander Hamilton knew it; so did Thomas Jefferson, George Washington, and James Madison. It’s why impeachment found it’s way into our Constitution. They had to find a way to deal with an out of control president.

If impeachment isn’t appropriate for this President, then who is? He’ll likely survive in the Senate, though. It’s remote, at best, that any Republicans will have a patriotic moment. Would millions marching in Washington change their minds? Fat chance. Millions in the street or not, if it means they might lose that coveted job at the U.S. Capitol, we know what route they’ll take.

The only chance is if Mitch McConnell calculates that pinning himself to Trump’s rear end puts his power in jeopardy. It’s all he cares about at this stage of his life. For now, it looks like the 2020 election is the only way we’ll be able to remove this President. So be it.

Nevertheless, Nancy Pelosi spoke today. None of this happens without her blessing and direction, so it’s on her– as it should be. I’m in full support. Whether he survives or not is irrelevant, because the Scarlett Letter of impeachment is now forever stamped on Trump’s orange forehead. Let the Republicans die on the sword for their hero, if they must.

The Founders would be proud we acted accordingly. Because this man, this President represents what Hamilton so eloquently warned us about:

“When a man unprincipled in private life desperate in his fortune, bold in his temper, possessed of considerable talents, having advantage of military habits—despotic in his ordinary demeanor—known to have scoffed in private at the principles of liberty—when such a man is seen to mount the hobby horse of popularity—to join the cry of danger to liberty—to take every opportunity of embarrassing the General Government and bringing it under suspicion—to flatter and fall in with all the nonsense of the zealots of the day—It may justly be suspected that his object is to throw things into confusion that he may “ride the storm and direct the whirlwind.”

From the grave, a Hamilton thumbs up emerges.