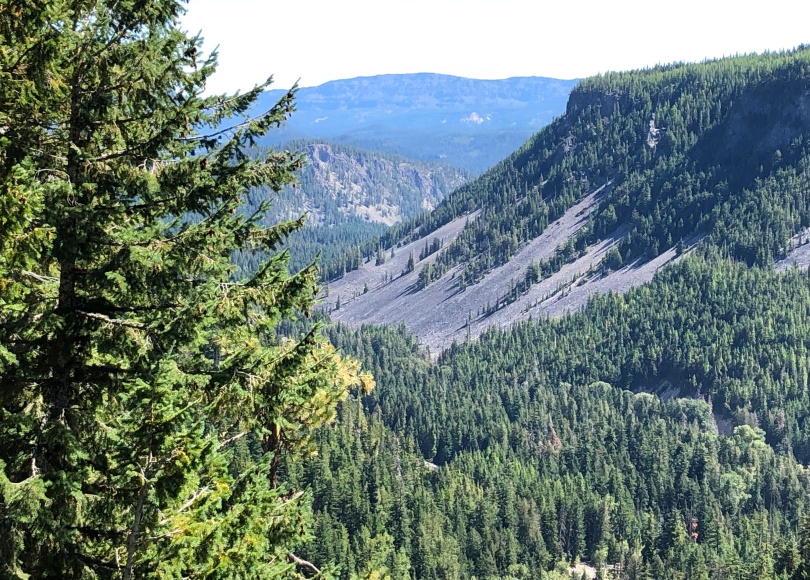 So I spent nearly a week on the road recently, traversing the great Pacific Northwest and chilling out with my better half. There was a lot of beer and wine, a lot of unbelievable scenery, and a brief respite from the goings-on in our upside-down political world. But I must say, politics is never too far away in my daily life, even on vacation. While I wasn’t into the daily back and forth as much, I still managed to follow what was going on.

And while the vacation itself was enjoyable, as well as relaxing, I still can’t forget what’s going on in the world around me. Looking out at the majestic vistas and mountains around me, I could not help but think of how fragile our beloved ecosystem has become.

In the process of driving over 1500 miles through some of the most beautiful areas you could ever imagine, I found myself thinking how the current President of the United States might be the greatest threat facing the region that we’ve ever seen. That’s right, some of the very regulation rollbacks attempted by this administration could endanger not only the surrounding environment but the wildlife and people who live here as well.

Our first destination was the picturesque town of Hood River, Oregon. There, we did what we so often do: hike/run, play a round of golf, drink some local craft beer, and of course stuff ourselves silly with great food. It’s a beautiful little town, with the still snow-covered peaks of Mt. Hood and Mt. Adams looming to the South and North respectively. The Columbia River is the lifeblood of this town, as well as serving as the de-facto border between Oregon and neighboring Washington.

Just how vital is the 1,243 mile Columbia River to the Pacific Northwest? In short, it’s benefits include low cost and reliable electricity, flood control, irrigation, navigation, and recreation. Because of its unique location, as well as the region’s topography and its gradients, water flows through the Columbia River System like no other river system in the United States. This unique combination and the hydrologic cycle is the reason that almost half of all hydroelectric generation in this nation comes from the Northwest, according to the Foundation or Water and Energy Education(FWEE).

And historically, all one has to do is look at the economic boom that has occurred in the Pacific Northwest region, much of it due to its reliance on the Columbia. According to FWEE, the gross national product for the Northwest grew from a few thousand dollars in 1792 to more than $300 billion in 1992. In other words, the Columbia River is an essential reason for the Northwest being a dynamic and highly prosperous region within the nation and world.

But all is not well with the River, as is the case for most inland waterways and oceans throughout the world. There are problems, big problems. Salmon populations have been dramatically going down for years due to the several dams that dot the River’s system, not to mention rising water temperatures due to climate change. Also, pollution issues, especially a 50-mile section of the River that flows where the former Hanford Site nuclear production complex operated, continues to cause alarm. Pollutants such as chemical pesticides, bacteria, arsenic, dioxins, and other highly radioactive waste from the Hanford Site infiltrate the River. State, federal, and Indian tribes have all engaged in trying to fix these issues, thankfully.

But, when you have a President of the United States who doesn’t even believe in climate change, and who is beholden to the fossil fuel industry, the future of such an essential treasure as the Columbia River is uncertain at best.

A perfect example is the administration’s April 10, 2019, executive order, which was part of a package of directives designed to pave the way for infrastructure projects like the Millennium coal terminal, which would sit along the Columbia. In his order, Trump asked the EPA to rewrite policies for how Section 401 of the Clean Water Act is implemented. That section of the federal law gives states and tribes authority over whether to permit facilities that release pollution into federally protected waters within their borders. In other words, Trump and his buddies in the fossil fuel industry would love nothing better than to fast-track and override states and tribes ability to limit pollution-emitting industries from operating near critical habitat and water sources.

The good news in this, however, is that the governors of Oregon, Washington, and California are all staunch believers in climate change, and are fighting the administration tooth and nail in the courts over all of his actions that may be detrimental to the region. So, it’s unclear whether many of the more draconian measures taken by Trump will ever prevail in the long run. But, he’s sure trying like hell. Hopefully, come 2021, we will have a Democratic president in place who will reverse many of these ridiculous and harmful executive orders from Trump.

The rest of the vacation

After Hood River, we traveled through the Yakima River Valley in Washington, amazed at the bountiful agriculture industry that exists there: wine, hops, apples, pears, potatoes, and much more. A few hours north, we arrived in a small community called Quincy, where we attended a concert headlined by the Dave Matthews Band, at a venue called the Gorge Amphitheater, perhaps the most beautiful spot for a show I’ve ever seen. The main backdrop amongst the towering cliffs behind the stage? You guessed it, the mighty Columbia.

From the Gorge, we headed West through the green and the mountainous Cascade Range, highlighted by the infamous and also snow-covered Mt. Rainier, as well as the crystal blue waters of the Tieton River, whose violent rapids were drawing scores of whitewater rafters. Our final destination on this day was the historic town of Astoria, Oregon, the city where the Columbia empties into the Pacific Ocean, in what many consider one of the most dangerous sections of water that exists anywhere in the world.

Finally, our last destination was in the tiny town of Yachats, Oregon, a few hours south of Astoria, where we stared in awe at the vast Pacific crashing into the rocks with an impressive display of strength and force. There, we enjoyed a wonderful seafood dinner and considered ourselves lucky of what we had witnessed on our trip, and a growing appreciation of what our earth has given us; and, unfortunately, what humankind is trying to destroy.

On a last and final note, I’d be remiss if I didn’t mention something else that I noticed on my trip—this time having nothing to do with the environment. No, this time it was a sign—actually several nearby. It was a sign I came across when I was jogging through a neighborhood in Hood River. It read: WE LOVE OUR NEIGHBORS/IMMIGRANT/LGBTQ/OF COLOR/WITH DISABILITIES/OF ALL AND ANY FAITHS. It hit me like a ton of bricks.

In our present-day situation, with a current president of the United States who has done everything in his power to divide us, instead of bringing us together, this sign said in clear and no uncertain terms: No, Mr. President, we will not allow you to do this to our country. We will not allow you to demean and punish specific segments of our population. We are all in this together. We’re better when we look out for our neighbors and each other. You are an aberration, and we will not stand for your hate and bigotry.

The fact that the sign exists, and that people feel the need to place it in their yards, tells us all we need to know about the present situation in the United States of America.

This presidency cannot and must not continue.