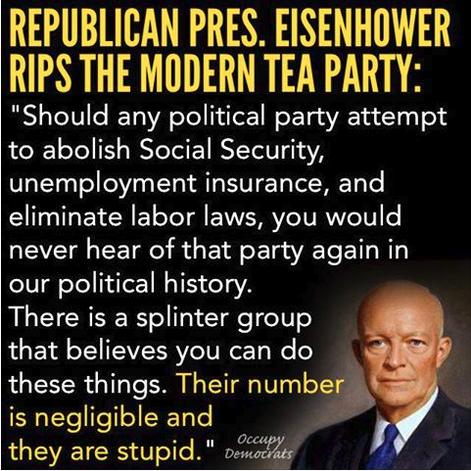 The quote above from the 34th President of the United States from November 8, 1954 provides a glimpse at a point in time when there actually was a Republican Party that could be called moderate. While President Eisenhower believed in the free market, the same free market today’s conservatives constantly lecture us about, he also knew there was a vital role for government in our society. Yes, of course government is there to provide for the common defense of our country. It’s also there to referee the massive economic system we call capitalism.

From time to time though, it becomes necessary for government to do more. Sometimes capitalism is brutal. Sometimes people fall through the cracks. Sometimes people play by the rules and work hard their entire life only to see themselves never getting ahead. This is the reality of capitalism.

And it’s because of this reality that we expect our elected leaders to act. Perhaps no leader understood this more than President Franklin Roosevelt. Out of his administration during the Great Depression came Social Security, unemployment insurance and minimum wage laws. These programs are still with us today. Even though the majority of Republicans were against these programs, pragmatic politicians like Eisenhower knew their importance to everyday Americans and had the good sense to speak out in favor of them.

Where are today’s Eisenhower Republicans? Answer: They don’t exist.

Today’s Republican Party bears no resemblance to the Party of Eisenhower. In fact, were he alive today Dwight Eisenhower would not recognize the party he once belonged to. For example, Republicans would love to dramatically alter Social Security. They would like to privatize it, raise the age limit, alter the way benefits are calculated as well as means test recipients. They like to call these changes ‘entitlement reform.’ What they really are is an assault on a successful social insurance program that has kept millions of elderly and disabled people out of poverty for decades.

Instead of working with the opposition party to try to strengthen the program for generations, Republicans are setting the stage for what they have been wanting to do for generations: nothing less than a full and complete gutting of Social Security and other vital social programs in order to pay for cutting taxes massively for millionaires and billionaires.

This is nothing new of course. They love to cut taxes for the wealthy and corporations, yet proclaim that it will have no negative effect on the debt or deficit. Then, when Democrats are in charge they claim entitlement programs must be cut in order to bring down those same deficits they were responsible for creating in the first place. Luckily, the Democrats now control at least one branch of government. We’ve dodged a bullet, for now. But, we know the drill. They won’t let up.

At the time of Eisenhower’s quote, Social Security had only been the law of the land for 19 years. It’s importance then, and it’s importance now have not changed. Eisenhower understood it. It started under Democrats and it will be up to Democrats to protect and preserve the program. It’s quite clear the other party is unwilling and unable to stand up to special interests and others that would love nothing better than to destroy the program.

Only when every day Americans begin to vote for their best interests, instead of against them, will things change in Washington, D.C.

Note: I originally posted this article back in April. I’ve updated it to reflect the current makeup of our government. The topic of course, is always relevant. Gutting the social safety net is, and has always been, a goal of the Republican Party.