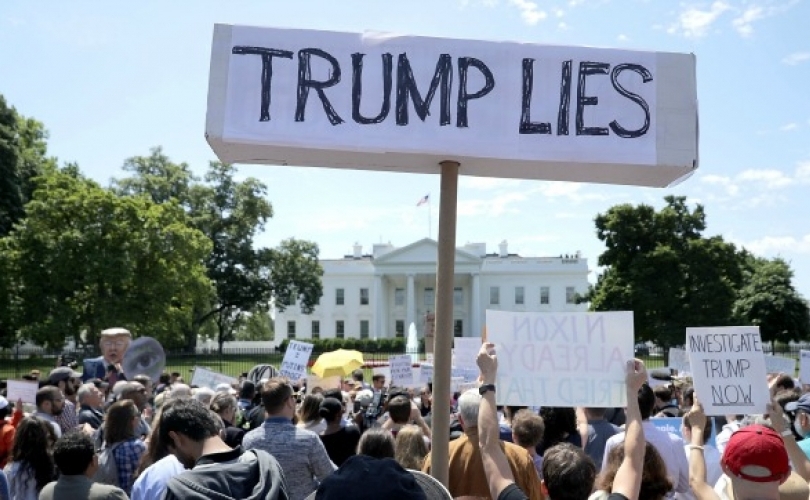 The major television networks had a choice yesterday. President Trump asked for prime-time coverage for a speech he says will deal with the national security crisis we’re experiencing at the Southern border. They granted his request.

In 2014, Barack Obama also asked for prime-time coverage of a speech he said was going to explain executive actions he was going to take concerning immigration, specifically the so-called “Dreamers.” Obama was denied his request. The reason given? “Overtly political in nature.”

Yep, they blew it then too.

How can both be true? It’s really pretty clear. President Obama was not a habitual and pathological liar. President Trump is. How do we know this? The Washington Post and other news outlets have actually had to pour resources into fact-checking this president. Currently, we’re significantly over 7,000 lies and false statements committed by Trump since he took office on January 20, 2017. The figure itself is hard enough to fathom. But, this is where we are. This president … this presidency … is not normal. The fact that the major networks are not conceding this reflects a continuing attempt, by most mainstream media outlets to somehow normalize this president. Granting him a platform to spread more lies and misinformation is an affront to our democracy. Yet, they’re doing it anyway. Thankfully, the networks appear to have granted Democrats an opportunity to provide a rebuttal to Trump’s speech. It’s the least they can do.

But denying Obama the opportunity in 2014 because of so-called political reasons highlights, even more, the absolute hypocrisy in allowing Trump to give his speech, which we know is nothing but political. This is his crisis, manufactured and carried out at the behest of talk-show hosts such as Rush Limbaugh and Laura Ingraham. When Trump signaled his intent to sign a continuing resolution before the holidays, which would have averted a government shutdown, the wheels in right-wing talk came off. Trump, fearful of angering his loyal base, set in motion a showdown with the Democrats over his request of $5 billion for a wall, that he repeatedly said during his campaign for president, would be paid for by Mexico. But again, even with this as a backdrop, the networks caved to Trump’s demands.

Unfortunately, the way this whole thing is playing out resembles what happened back in 2002 and 2003 when the Bush administration put an all-out blitz in the media, proclaiming under false pretenses that Sadaam Hussein possessed weapons of mass destruction. Other than a few media outlets that questioned the efficacy of going to war in Iraq over these claims, many were woefully silent. We see what happened then. While a battle over immigration cannot be equated with going to war, granting Trump the platform … any platform for that matter … to spew his politically motivated propaganda, should be a wake-up call for all of us.

At this moment, we can’t know for sure why the networks are bending over backward for Trump. But let’s say for argument’s sake that the opposite had occurred. What if the networks refused to air the speech? We know what would have happened. Trump would have exploded on Twitter. He would have played the victim, as he so often does. Fox News would be crying about the ‘liberal’ media bias. Rush Limbaugh would have told his 20 million listeners how he’s been right all along about how the mainstream media hates Trump. With that easily predictable outcome, could it be that the heads of those networks didn’t want to deal with the noise? In other words, did they ran scared? Were they fearful of the right-wing hit job that would surely come their way? It’s a sad state of affairs if true. But we can’t discount it.

So, the networks have dropped the ball on this. But, the decision has been made, so we’re stuck with the results. It appears that House Speaker Pelosi and Senate Minority Leader Schumer will do the rebuttal. It shouldn’t have come to this in the first place, but at least we know that President Trump will not be able to get away with making stuff up. Again, this not a normal president and fact-checking in real time is the only way to combat the propaganda. The American people deserve a president that at least tries to tell the truth once in a while. Sadly, we don’t have that luxury now.

When Barack Obama made his request in 2014, the networks should have obliged. Sorry, but the political argument given by the networks does not pass the smell test, especially in light of what they’ve just decided to do. Otherwise, for consistency alone, Trump should have been denied for those very same reasons.

Something else is going on here. This president could very well proclaim that we have a national emergency at the border in his speech tonight. No evidence thus far exists that suggests this is true. Do we have a humanitarian crisis? That’s a much different question, and there is evidence to suggest that we do. But, it’s a crisis of his own making. Most likely he’ll try and conflate the two.

Either way, if he does indeed declare a national emergency, we know that Rush Limbaugh will be pleased. We also know that Fox News and right-wing Twitter will sing his praises. In Trump world, nothing else matters. And we have the major news networks to thank for this. Their complicity should alarm us all.