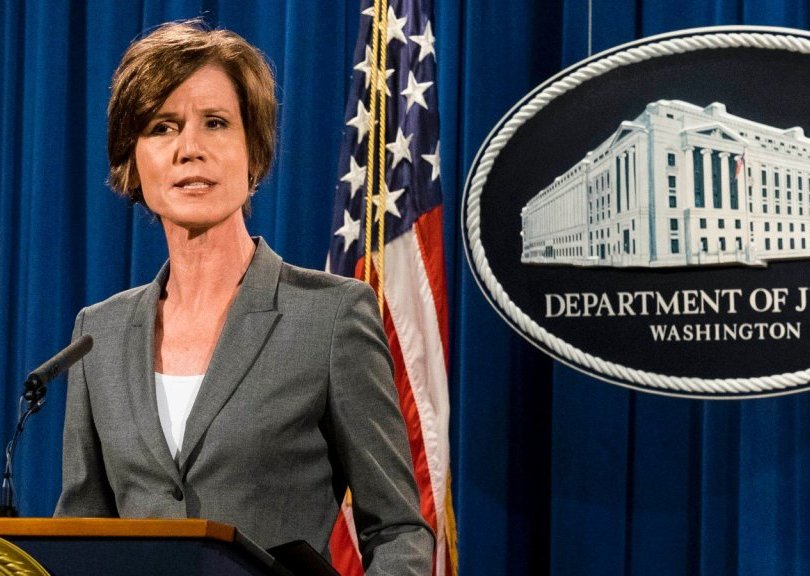 Yes, I know that the mid-term elections are quickly approaching. I know that this happens to be one of the most important elections in our lifetimes, a real chance to send a message to the Republican Party and their leader Donald Trump that the American people are fed up and ready to hold them to account. Many on the left will say that 2020 is a long way off and let’s just concentrate on 2018. To that I say: we can do both. And, we must do both. Finding a candidate in 2020 to take on Trump or whomever they throw out there is of paramount importance. The bottom line is that the Democrats must win, both in 2018 and 2020 to have any chance of shifting from the perilous course this administration has chosen for our country. So, I would like to make a case for someone I believe might actually have a chance to win in 2020, although I have no idea if she wants to run or even what her political views are. That person is Sally Yates. First, some background on her is needed before I can make the case for her as a possible candidate.

Sally Yates is 57 years old. She was born in Atlanta, Georgia to John Kelly Quillian, a long-time attorney and judge, and Xara Quillian, an interior designer. She received a Bachelor of Arts in journalism in 1982 from the University of Georgia and then received a law degree in 1986 from the same university.

2010- Nominated by President Obama and confirmed by the Senate to be U.S. Attorney in the Northern District of Georgia. 2015- Nominated and confirmed by an 84-12 vote in the Senate to be Deputy Attorney General of the United States. 2017- Took over as temporary Attorney General under Trump until successor could be named(fired 10 days later by Trump for vowing not to defend the controversial ‘Muslim’ travel ban).

This is the area where many in the progressive community will have second thoughts concerning Mrs. Yates. We just don’t know much about where she stands on many issues. What we do know is that she’s a Democrat. There are relatively few insights into her core political beliefs but there are a few things that we can point to that might give us a little better understanding. For instance, she has advocated for and pushed for more lenient sentencing laws for non-violent drug offenders as well as an expanded educational system in prisons. In addition, she’s also advocated tougher actions against any wrong doing committed by Wall Street executives. In other words, while prosecutors tend to go much easier on the white-collar criminal, Mrs. Yates bucked the trend. Finally, she has spoken out in favor of gender identity as it pertains to the Civil Rights Act of 1964 when there are cases involving sex-based discrimination.

So, why Sally Yates? Here we have a 27 year Justice Department employee with no political background to speak of. There are many candidates being mentioned as possibilities for 2020 who have substantial political experience, as well as support throughout the progressive community: Senator Elizabeth Warren, Senator Bernie Sanders, former Senator and Vice-President Joe Biden, Senator Kamala Harris, and Senator Cory Booker. There are others mentioned as well. Honestly, all of these candidates, if they choose to run, are worthy and deserve the chance to make their case. But for me, I’m intrigued by Sally Yates. Ironically, it’s not entirely clear at all whether she’s interested in running for office…any office. In fact most of her statements have been pretty cool to the idea. But, if you listen closely, she doesn’t rule out running for office at some point in the future. Her husband has urged her to keep her options open. This fact alone gives me hope that she just might throw her hat in the ring.

Again, I’m intrigued. And much of my intrigue is based on the notion that Donald Trump will still be president in 2020. Yes, I am sickened at this possibility. But progressives must prepare themselves for such an outcome. I say this because if Donald Trump is known for anything it’s the fact that he has been able to get away with a lot of unethical, if not criminal behavior over his long career as a real estate developer and casino owner. As many of his biographers have stated, the man knows how to survive and fighting the ‘system’ is what he does best. So while we hope Robert Mueller will reveal Donald Trump to be the con man he really is, the possibility he eludes punishment cannot be ignored.

In 2020 we may face a situation where the economy is still performing well. But we also know that the probability of more scandals developing under Trump between now and then is very high. How much corruption and lying is the public willing to tolerate if things are going well in the over-all economy? What kind of candidate will it take to confront that corruption and lying? What about the destruction of our norms and institutions, hallmarks of our functioning democracy for over 240 years?

In my view we need a candidate that not only has credibility, but also exudes confidence, stature, dignity, and not a hint of scandal. We need a candidate that will stand up for our democratic values and who inspires others. We also need a candidate that will stand up for the rule of law and ethical conduct throughout government and stand up to those who do not. Remember, it was Mrs. Yates who went to the White House during her brief stint as Acting Attorney General to warn Trump about his National Security Advisor Michael Flynn being susceptible to blackmail by the Russians. It was also Mrs. Yates that stood up to Trump concerning the travel ban he initiated, letting him know that in good conscience she could not defend the measure, which of course led to him firing her.

What Sally Yates lacks in political experience she more than makes up for with her stellar career at the Justice Department. In fact, to me her lack of political experience is a positive. She’s a fresh face. She has no political track record, which would shield her from relentless attacks from Trump or even her fellow Democratic opponents for that matter. As we move closer to 2020 I believe the American people will be ready for an ethical and stand-up candidate. Someone that will stand next to Trump at the debates, look him in the eye and let him know that his performance in office has threatened our democracy like no other president before him. Yes, we need to find out where she stands on the issues. We need to see her campaign throughout the country. I want to see how she fares against other Democrats. But I believe Sally Yates would be up to the task.

Perhaps I’m being a bit naïve here. I know it’s a long shot that she might enter the fray. And, even if she does she may not be up to the task of political campaigning. It’s not for the faint hearted. If you don’t have that all important ‘fire in the belly’ to do it, you probably shouldn’t even try. But my gut tells me if enough people encourage her to run, she will do so for the good of the country.

Finally, I have one message for my fellow progressives: please keep an open mind. A purity test for her liberal bona fides is not what we should require. We need to get behind the candidate who can and will win. If she decides to do this, we will find out what she believes in. There are many things on my hope list but I’m willing to give her a chance. I will get behind whoever the Democratic candidate ends up being, whether it’s Sally Yates or someone else. But my sense is that Sally Yates is the real deal. There’s something about her that stands out to me. I think America is ready to elect a woman. But it has to be the right candidate at the right point in time. I believe she can be that candidate.